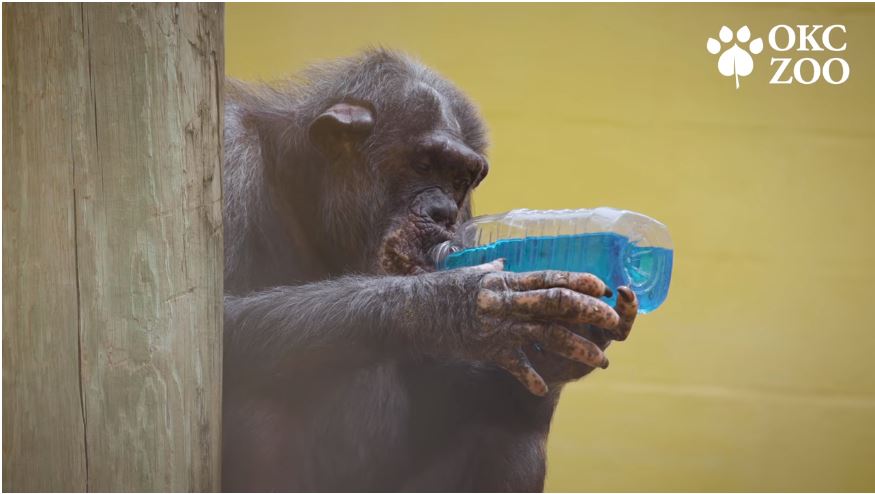 Last month, Cindy, the Oklahoma City Zoo’s oldest chimpanzee, was involved in an incident while outside in her habitat with her troop that resulted in her experiencing vision loss. The Zoo’s veterinary team performed an eye exam and after monitoring Cindy for a few days realized she was having significant challenges with her vision and consulted Dr. R. Michael Siatkowski, an ophthalmologist with Dean McGee Eye Institute, about performing a visual assessment on Cindy.

Dr. Siatkowski performed a visual acuity test – that’s the same as reading an eye chart for humans – on Cindy at the Zoo’s Great EscApe habitat. Using Teller acuity cards designed for infants, young children and non-verbal humans, Dr. Siatkowski confirmed that Cindy’s vision had decreased in both eyes. Her vision is currently equivalent to a 3-month-old human infant. Cindy voluntarily participated in the entire exam thanks to the trust and bond she has with her caretakers through ongoing training.

At 52, Cindy is a geriatric animal and her caretakers have modified her daily routine to accommodate her diminished vision. Cindy continues to be in good spirits, enjoying her favorite treats (like sugar-free, blue raspberry Kool-Aid!) and training with her caretakers. The Zoo will share updates about Cindy on social media.